As a UX-UI Design intern at the digital design studio Théoriz, I was in charge of designing the interface of an immersive and interactive room which invites artists and scientists to innovate together.

In partnership with the CEA, the Hexagone theatre, and the Atelier Arts Sciences in Grenoble, this project aims at creating a multifunctional and modular space that triggers disruptive innovation in the field of digital art and science. It would host seminars that facilitate discussion and collaborative experimentation across fields of expertise, and allow artists in residence to create new types of experiences thanks to the variety and accessibility of suggested mediums: VR, AR, mixed reality, mapping, sound spatialisation, immersive images, and videos projected on the walls...

To better understand the expectations of the partners, I first defined the needs of the different users of the immersive room. For each of the two main use cases, I identified a persona's expectations and frustrations for such an unconventional service. An artist in residence, for instance, would need an extremely flexible interface to avoid restricting her creativity while experimenting with mediums that already ask for technical abilities like mixed reality. On the other hand, a seminar facilitator would primarily use basic mediums like images and videos, that he prepared on a USB key, and will therefore need a file finder interface that is accessible at any time of the seminar. Both users need the interactions with the controller to be intuitive and easily remembered, to allow other users to participate. 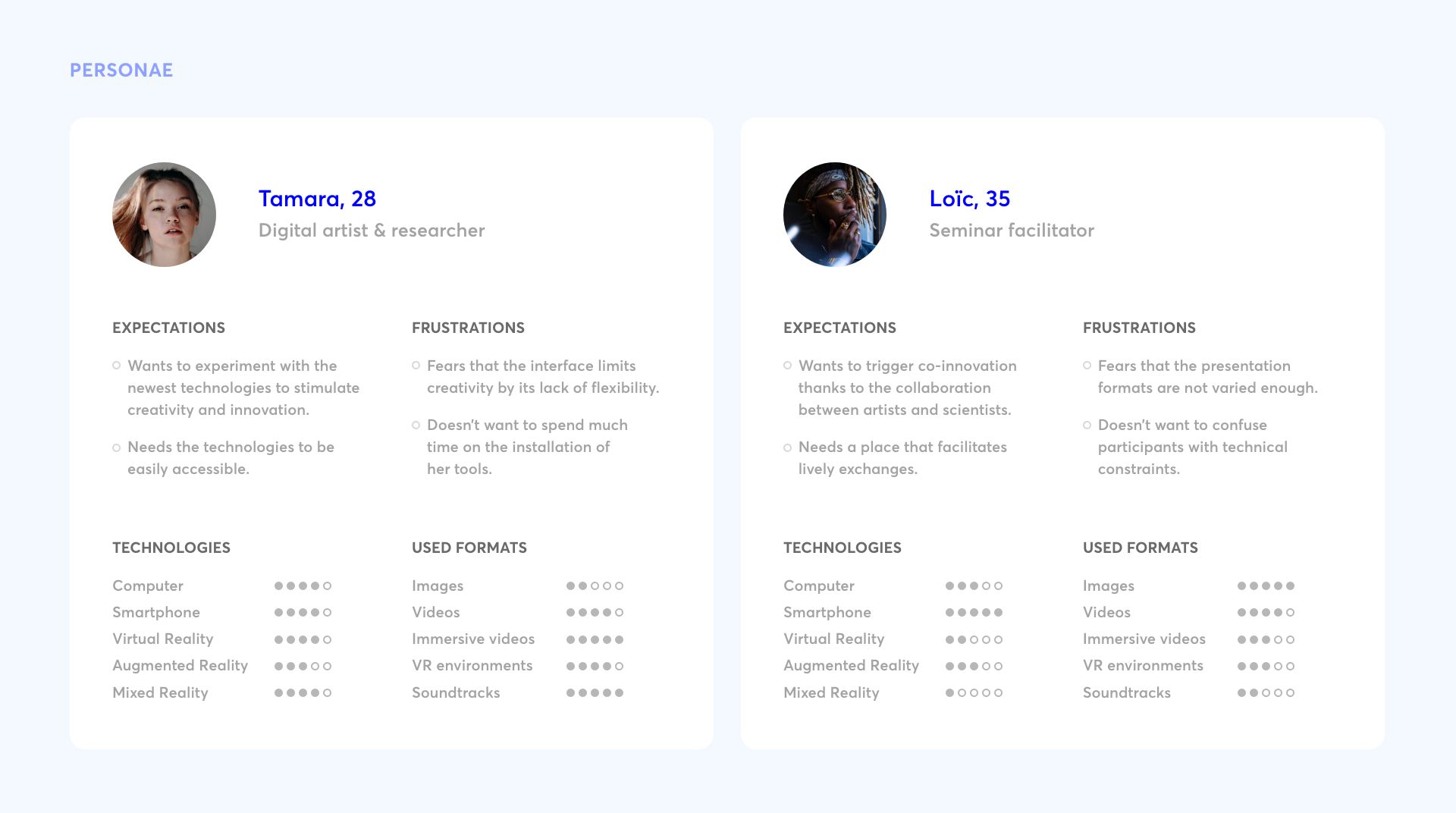 In accordance with the Atelier Arts Sciences' visual identity which features pastel colours and smooth curves, I designed a visual identity that reminds of the sensible world of dreams. It brings poetry to the interface with a light pink, a bright blue, and a soft grey, and inspires infinite experimentation thanks to its simplicity that highlights the content.

The interactions with the interfaces projected on the room's walls were controlled by the user thanks to the Valve Index knuckles, which can also be used as VR controllers. Because they allow a large range of interactions, it was essential to limit the number of interactive keys or movements to avoid confusing the user. After many demo sessions and testing various interaction options, the team's engineers and I agreed on keeping only three keys of the controller, which would allow six interactions with the interface: the trigger, the trackpad, and the grip force sensor. In this way, users can easily move, rotate, expand and reduce files, manage the sound and the luminosity...

To test the usability and coherence of the interface, the Théoriz team and often tried it out in the company's (slightly messy!) mixed reality studio, with and without the client. This allowed us to define the backlogs' priorities and to iterate constantly on our collaborative work.

Finally, this interface was delivered to the client in Grenoble and is now used for various digital art festivals, collaborative seminars, and other events that trigger disruptive innovation between art and science. During this project, I discovered the possibilities of the VR controllers in terms of interactions beyond VR. By discussing my design choices with the client, I also developed my expression skills and learnt to adapt to the client's preferences.